Famagusta city is situated in the east of Cyprus in a very important strategic geopolitical place, where East and West meet, in the crossroads i would say of three Continents Europe, Africa and Asia and the place has a history and civilization of 36 centuries.For a thousand years it was the capital of Cyprus and during the blooming years it managed to unite all twelve kingdoms of Ancient Cyprus.

Today's Famagusta is a continuation of a series of other cities that from the 17th b.c. century until 1974 played an important role in the history of Cyprus.

According to archaelogy and Famagusta History  during the 17th century b.c. Engomi was built by a group of farmers and copper technicians near an ancient city called Alasia. The excavations proved that Engomi progressed a lot and lived for five centuries with the first Greeks Myceneans and Achaneans arriving and settling down. Excavations brought to light luxury mansions and imposing cyclopean walls. Engomi was destroyed by the so called " People of the Sea" and people moved nearer to the sea. 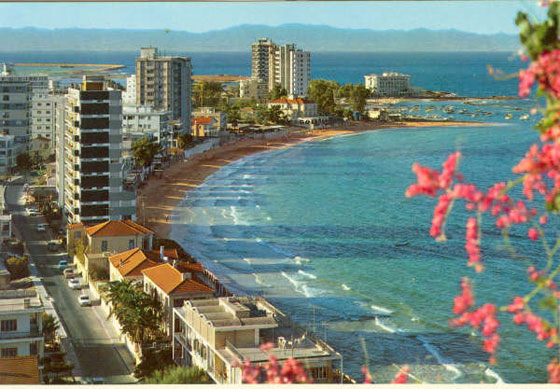 The Nobel prize poet and great friend of Cyprus Giorgos Seferis when visited Cyprus three times and wrote many poems for Cyprus, wrote a great poem about Engomi.

Near the sea, Salamina a new city was built. According to tradition, the founder of the city was Tefkros, son of King of Greek Salamina Telamona. who arrived in Cyprus after the end of the Trojan war and settled on our island, because his father wouldn't allow him to return to his own country because he hadn't prevented his brother Aias suicide.

For a thousand years, Salamina was the capital of Cyprus and its kingdom the most important kingdom of all twelve greek kingdoms on the island. In Salamina famous kings ruled among them Onisillos and Evagoras A'. They all fought  against the foreign conquerors and remained in the history of Cyprus as eternal symbols of fights and freedom. During the fight against the Persians, Onisillos had a tragic end by beheading and the bees made honeycombs on his head therefore the Delfi oracle decided that he was to be buried with honours.

Evagoras the First A' was a nationwide political and intellectual personality. The great Athenian rhetorian Isocrates devotes a whole evlogy and the Athenians honour him with different ways. He was the first who conceived the idea of Panhellenic Association and cultivated the Greek letters maintaining the traditions and customs of the Greek people in Cyprus Salamina. Evagora's major activities were to root out any filopersian feelings and establish the philellenic spirit. Finally Salamina and the entire island were liberated by the great Greek Commander Alexander the Great son of King Philip of Macedonia.

After Alexander the Great, along came his successors Ptolemies in Salamina and all over Cyprus. The Roman Empire follows with the Greek Culture superiority over the roman same that happened in the rest of Greece. The Byzantine times secure the Christian religion and there are lots of findings all over Cyprus of  Byzantine culture. Then follow the Luzignan, Venetians, Turks English with the Turks coming back tougher.
Christianity was spread in Cyprus by Apostoles Paul and Barnabas. Barnabas was from Salamina and his grave is near Salamina as the monastery which was named after him. He was the founder of Cyprus Church. Tradition says that in 488 a.c. the Archibishop of Cyprus Anthemios had a vision that Apostole Barnabas showed him the place where he was buried. He found him under a carob tree with the gospel of Mark on his chest. He offered the Gospel to the emperor of  Byzantium Zenon, and the emperor in return gave the Archibishop privileges and the church of Cyprus independency. From then on the Church of Cyprus is Apostolic and independent and the Archibishop of Cyprus holds imperial scepter, wears a red cloak during official ceremonies and signs in red ink.

Salamina was destroyed by earthquakes but still remains the most significant archaelogical place of Cyprus together with Paphos. There is also the magnificent outdoors theatre comparable of that of Epidaurus and the famous High School with its characteristic statues.